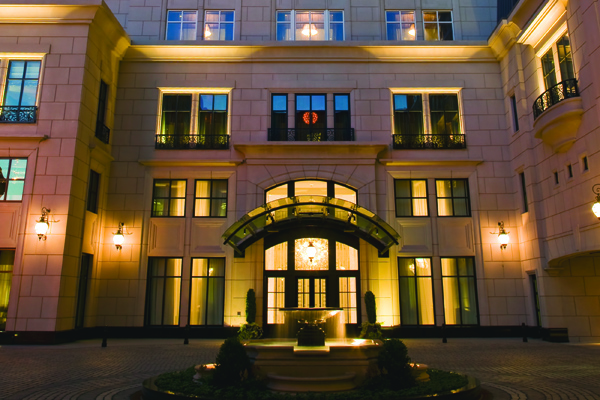 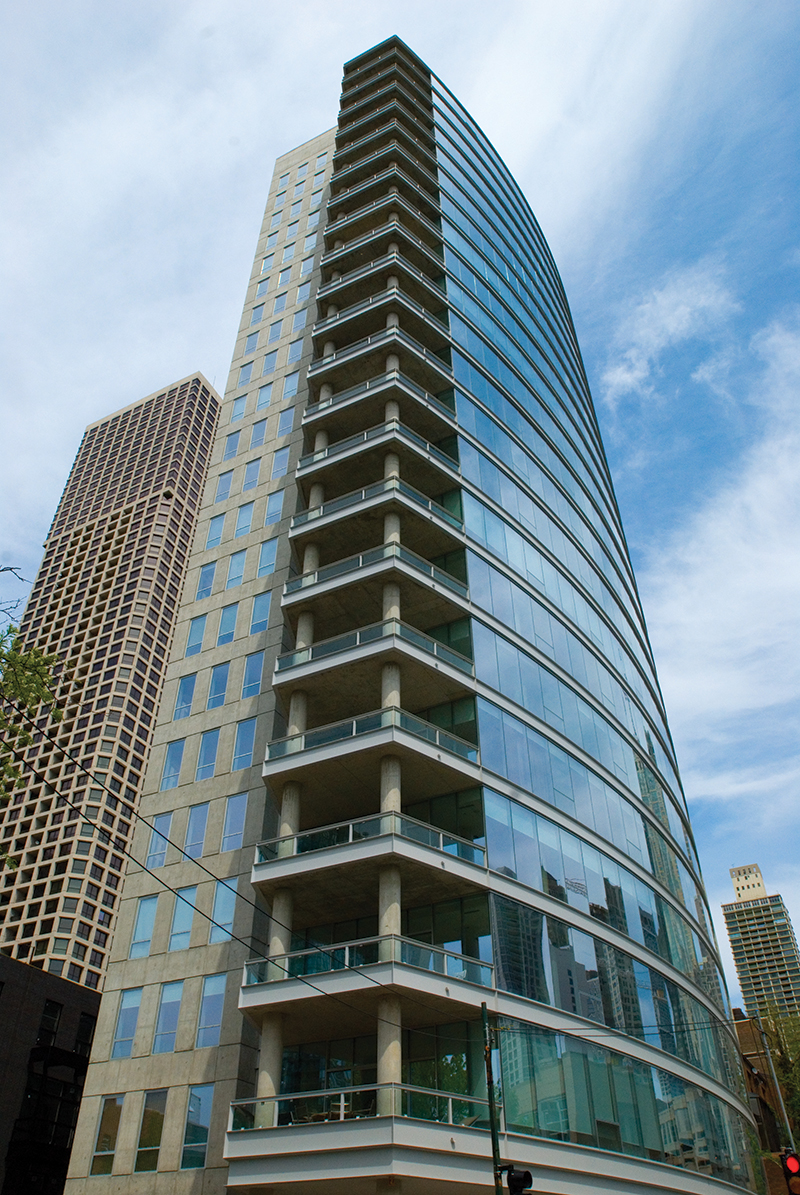 Is unit sales decline indicative of low inventory or a softening market?

Luxury sales activity in a subset of 15 high-end condo buildings is headed for a fourth straight year of declines based on closed transactions through the first three quarters of 2017. The 15-building sample includes luxury developments such as The Waldorf Astoria, Palmolive, Trump Tower, Park Tower, Lincoln Park 2550 and the just completed 4 East Elm. 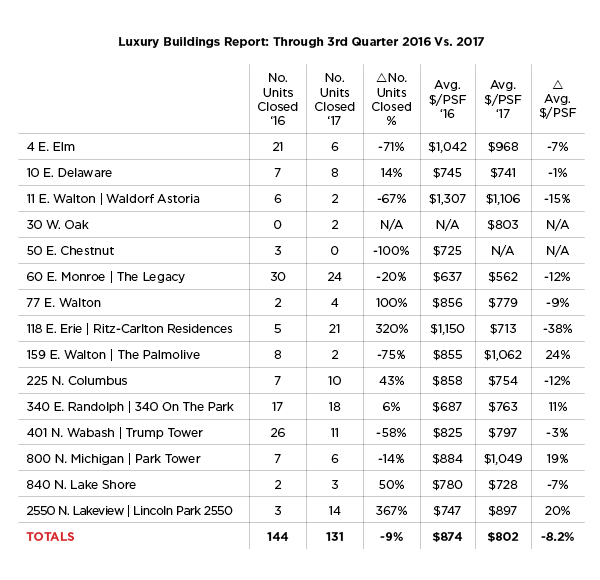 Real estate observers have grown accustomed to tying declining sales to limited inventory. And while any number of mitigating factors are at play in this relatively small survey, the data still begs the question of whether the high-end market may be headed for a slowdown after several years of strong post-crisis performance.

Among those mitigating factors, the units that have traded so far in 2017 have been less grand, in aggregate, than last year’s crop. For example:

On a related note, average unit size for closed transactions in these buildings is down almost 10% year over year – from 2,317 square feet to 2,090 square feet. Generally, in the luxury market, larger floor plans command a higher PSF than smaller ones. 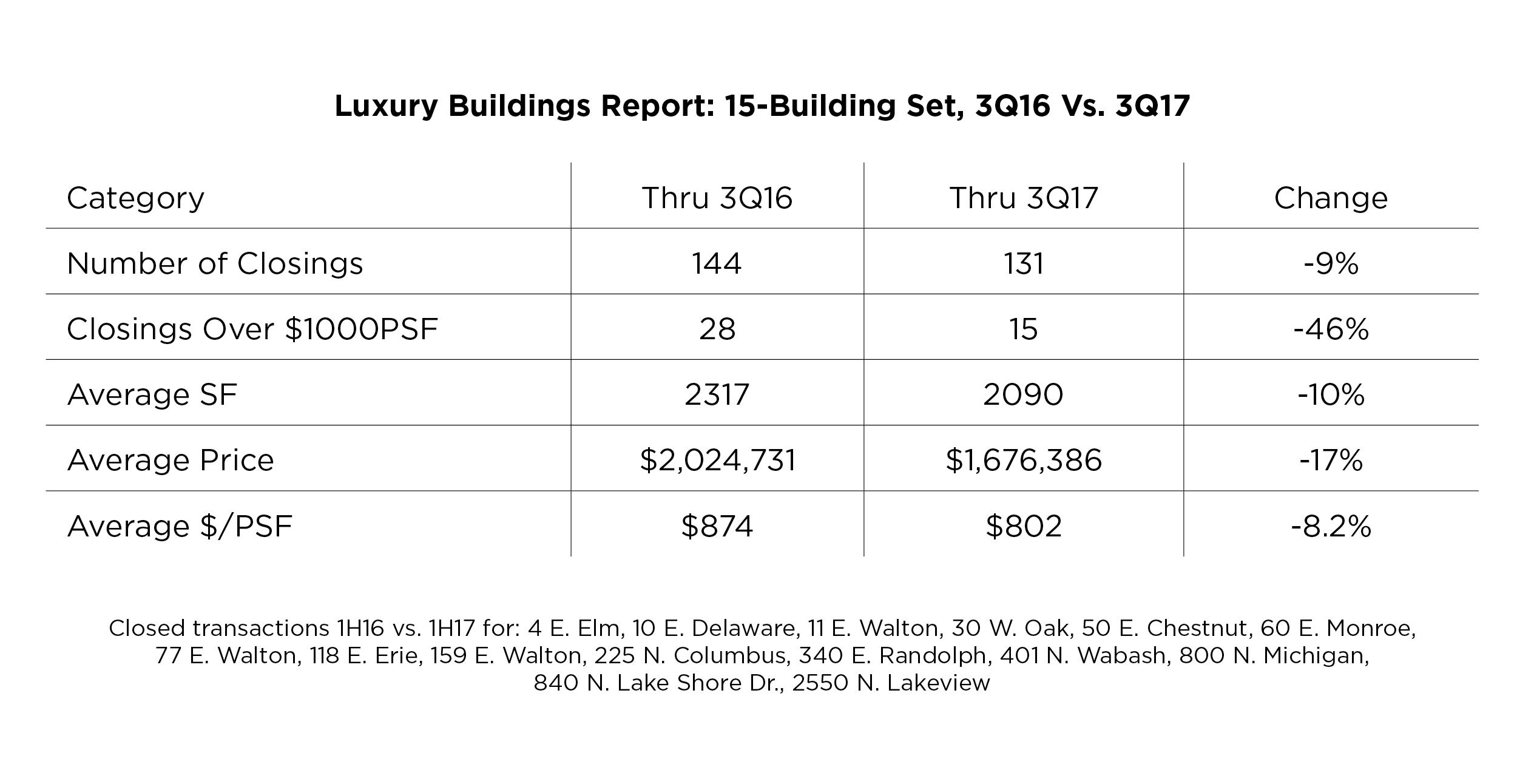 These conditions may explain the drop in average PSF, but questions still remain when it comes to luxury supply and demand.

Outside of the 15-building survey, unit volume for condominiums priced at $1,000,000 and up in the Near North and Loop market areas is up 9% year over year, through three quarters. That’s good news, but active listings are up an average of 34% year over year. As a result, average Months’ Supply of Inventory through 3Q17 is trending 20% higher than last year.

One cannot definitively conclude that the luxury market has plateaued. As the 15-building survey shows, the trend lines diverge depending on specific product types, locations, and price strata within the broader luxury segment. In fact, last month, the same developer canceled sales at one luxury condo development while announcing another just two blocks away. Still, the collective data points we monitor do appear to sound a cautionary note.

We will continue to research and report, with an update on the full year’s activity delivered to your inbox in early 2018.

After logging 31 sales in a decade, The Ritz-Carlton Residences brought in @properties, and notched 25 in one year.

Lack of inventory is one of the most talked about current trends in the luxury market.

Luxury, efficiency and value co-exist in maintenance-free condos, in a walk-to-town location.