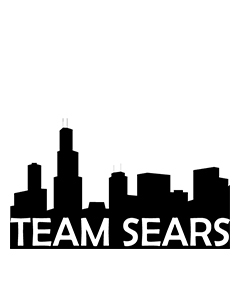 Chris started selling real estate in 2001.  An undeniable go-getter, he was named Rookie of the Year for the entire central region of Coldwell Banker his first year and was recognized as a President's Club recipient at Coldwell Banker for several consecutive years.

Christy joined the team in 2003 and acts as the primary contact for most of our buyer clients.  She has her managing broker's license in Illinois and in 2020 became licensed in Michigan.

Together, we have sold nerarly $300 million worth of real estate.  Year after year, Team Sears has been recognized by the Chicago Association of Realtors as among the largest producing agents in the association, but probably most importantly of all, as a 5 Star Agent “ a award that is offered by Chicago Magazine but can only come from client interviews & testimonials.

There are some very large teams in the Chicagoland marketplace where, very often, you will dialogue with the team lead only at the start and finish of your project.  There are also sole practitioners where you will dialogue, and receive the counsel of only 1 agent.  Over the years, we™ve tried it both ways; working independently and also with numerous, junior team members.

In the end, based on client feedback about feeling "under-counseled" when referring to previous brokerage representation, Team Sears has settled on what we believe is the very best format: 2, highly qualified, brokers who discuss and consider all aspects of your situation.

Certainly, this limits the number of clients we can serve at any one time, and also why we can't/won't post that we've sold $1 Billion in real estate - or other such extraordinary claims for any 1 realtor.  But, we've done it all when it comes to residential real estate: urban/suburban/high $ sales/low $ rentals/development/ management/condos/single families/multi families and so on - the principals have a tremendous reservoir of experience, and you will be dealing with a principal.  Our closing % is nearly 100%, and our clients get full horsepower, undivided attention during their project.  If that's of interest, let's talk.