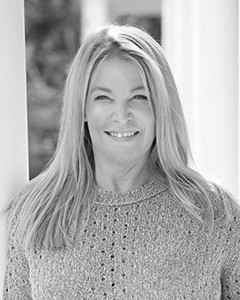 
Looking back on her interests and skill sets, real estate seems like a natural profession for Jena Radnay, but it wasn't always so obvious. Originally from Hinsdale, Radnay got a degree in nursing from Georgetown University, then moved back to Chicago. Her dad wanted to ensure she had a job after graduating, but she never worked as a nurse for even a day, instead interviewing at DDB Worldwide Chicago, one of the country's top advertising agencies. After eight rounds of interviews, she landed the job she wanted the most.  ere, exposed to high-level clients, she honed the skills that today help her thrive in the real estate market.

"McDonalds was my client, and I was in meetings presenting ideas to the CEO, the president, the head of marketing, so I always had to get my act together," Radnay says. "I was always challenged in a good way, and you always had to be on your A game. It was really about client development, and all those years of client management have helped me build by business today."

This is important to Radnay, who credits her love of marketing for much of her success. She says many people feel forced into real estate as a career because of a fall back career when something else doesn't work out, but that wasn't the case for her.

I love marketing and I've always loved houses, and I wanted to combine those two passions.

"I found myself at work always looking at housing websites, just sitting there and scrolling through them or giving friends advice when they were buying. I knew I had to do something with that passion."

So Radnay quit advertising, and closed her first million-dollar deal just two weeks later, confirming to herself that she truly had the right skill set for the job. From there, she worked in Chicago for a few years, then moved to the North Shore, where she had to work hard to get to know the area and make connection

"I was coming in as a top agent from the city, so it would have been much easier to go to Hinsdale," she says. She chose the North Shore because that's where her friends were, and she was determined to become respected in the neighborhood and make a connection with her clients.

"I had no pipelines, and it was hard at first. It's not easy to come into a new area where other people have been doing it for years, or have longstanding family and friend connections."

Once she got a few clients, the referrals started pouring in, largely because of Radnay's emphasis on street smarts and human connection.

"The most important thing to me and to my job is the personal connection," Radnay says. "I like to know my clients and understand them and what they're about. If I know that, I can know how to approach them and know how to get things done in the best possible way. Some people focus on the deal, but I focus on the people and figuring out personalities to make things come together."

Radnay credits her mom, who she says came from nothing in terms of money, yet had it all where it valued the most: intuition. "She taught me to be street smart. It's been in me my whole life, getting how the world works, and it's so much more valuable sometimes than things you can learn in a book or at school. It's a big component in how I do business."

This savvy outlook, extensive experience, and personal relationships have helped Radnay become a leader in her field. Today, her business primarily comes from referrals, and whether representing a buyer ora seller she is known as an expert and one of the best agents to work with. Her reviews are consistently stellar, praising her work ethic, knowledge, and personality.

"Jena came highly recommended and she did not disappoint. The phrase used to describe her when receiving the recommendation was 'dog on a bone'. It is an accurate representation of how she works with not only the seller and potential buyers, but also the larger real estate ecosystem - including the lending community. She feels strongly that getting to an executed contract is only the first in a long list of things that need to happen to get to a successful close. She and her team help manage the entire process!

"Jena was outstanding! Very responsive, easy to work with and very knowledgeable in the negotiation process. We will definitely use her again!"

"The best realtor... hands down! She gets it done!"

"Jena was terrific. After several months on the market, we wanted advice on making the house a better fit with what our target buyer wanted. She walked in, told us the few things she recommended changing, and said she would get everything done and we didn't need to worry about finding fixtures, painters, etc. - she would do it all for us. She did, and within less than 2 weeks we had 2 strong offers. We couldn't be happier, and I've recommended her to several friends."